How far can we go, with off-the-shelf equipment

One question which I have been pondering for some time is: do I need to have a digital camera converted to full-spectrum for UVA photography? and are there any modern objectives that are good accidental UVA-objectives?

This is not a question of cost alone. Although a converted camera can be used for VIS photography, obtaining good colour reproduction requires effort. A suitable filter is used on the objective to replace the one removed from the image sensor unit during conversion. As it is not possible to find a perfect match to the filter removed, one or more colour profiles of the camera need to be created and applied instead of the one used automatically by the camera and/or raw file converters. So, in many cases, for best results one would need to carry two different cameras to any field trip. In addition a conversion voids the camera manufacturer’s warranty and even access to official service facilities.

The most frequently used objectives for UV photography can be grouped into special purpose and accidental. Those in the first group have been designed with UV-photography in mind, and are extremely expensive. Those in the second group are objectives designed for VIS photography, mostly manufactured before the mid 1970’s,  but which have been tested good for UV-photography (see my earlier post for details). Objectives designed for UV-photography, both old and currently in production, and accidental UV-objectives are all fully manual objectives. The exception are two modern objectives that have been described as accidental UVA-capable: Sigma 19 mm f:2.8 DN Art, and Sigma 30 mm f:2.8 DN Art (available in M43 and Sony E mounts).  The big plus of these two objectives is that they allow auto-focus when used with short-pass UV filters in full-spectrum converted cameras (in bright sunlight or using a good UV-A flashlight).

Given the limited spectral response of digital camera image sensors, special-purpose objectives that transmit radiation all the way to the UVB or UVC are not that much of an advantage compared to lenses that transmit well only UVA. For digital UVA photography what is important is the ability to transmit UVA radiation down to approximately 330 nm. The shortest wavelength that “accidental” UV objectives transmit varies widely. The best known are the Kyoei Acall 35 mm objective from the 1960’s and other objectives using the same optics sold under various brand names. After they were discovered as UV-capable in 2012, their market price increased significantly, specially for those branded as the one first described. Some eBay detective work allows one to buy them quite cheaply under different brands. These objectives transmit UVA up to around 325 or 335 nm. In other words, almost the whole of the UVA band which extends from 315 nm to 400 nm. Many other accidental UV-objectives, which are still found useful, transmit down to only 350 or 360 nm. Most accidental objectives are old optical designs, usually of simple construction, and capable of acceptable image resolution in the UVA only if the diaphragm is stopped down to f:8 or even f:11. Good accidental objectives can  usually be bought for between 20 and 300 €. The  special purpose objectives usually perform better, producing sharper images, but cost between 5000 and 10000 € and in some cases are rather fragile.

Of course, UV-photography requires the use of short-pass filters, transmitting UV radiation and blocking all VIS and NIR radiation. The Baader Venus-U filter, designed for astronomical observation of Venus, is usually considered the best filter for UVA-photography. This filter has maximum transmission at 350 nm, and good rejection of VIS and NIR. A newer filter, the UVROptics StraightEdgeU (currently in its second version), has a steeper slope allowing it to have maximum transmission at 379 nm but still cut VIS and NIR radiation. This newer filter is more effective than the Baader U-Venus at rejecting NIR.

Digital camera image-sensors differ in their sensitivity to UV, or rather the filters on the sensors have differences in how much UVA radiation they transmit. On some photography blogs there have been discussions about the differences between Olympus and Lumix (Panasonic) M43 cameras in their susceptibility to chromatic aberrations (CA). The on-line “story” goes more or less like this: Panasonic objectives when used on Olympus cameras exhibit stronger CA than on Lumix cameras, while the reverse is not true. The solution to this problem is to use a strong UV-blocking filter. The justification is that Olympus cameras are responsive to UVA, and while Olympus Zuiko objectives are corrected for CA at these wavelengths, Lumix objectives are not, as Lumix cameras completely block UVA, and possibly some VIS violet radiation.

Q: Would it work?

So, what would be the most effective way of combining these components, for UVA photography with an of-the-shelf camera. I have been using for some years an Olympus E-M1 (Mk 1) camera, and I have also access to an identical camera converted to full spectrum. I will describe below the informal tests I have done, and the results obtained.

After this long introduction, you may want to already know the answer: Yes, an off-the-shelf Olympus E-M1 with either the Sigma 19 mm f:2.8 DN Art or the Sigma 30 mm F:2.8 DN Art and a StraightEdgeU filter can be used for UVA-photography. Both objectives auto-focus, and auto-exposure requires only a not too large compensation of +0.7 to +1.0 EV. What is even more important, they can be used without problem near their maximum diaphragm aperture of f:2.8. However, false color appears weaker than with a converted camera. Flower patterns and sun protector on people’s skin can be captured without problems, but the resulting images are almost monochromatic.

The Sigma DN A objectives

I have been using the Sigma 19 mm f:2.8 DN A (s/n 51635210) and Sigma 30 mm f:2.8 DN A 013 (s/n 50107246) for UV-A photography for a couple of years. These two Sigma objectives are native M43 objectives. They do not transmit the shorter wavelengths of the UV-A as readily as an adapted Kyoei Acall 35 mm f:3.5 objective from the 1960’s but being modern objectives support automatic exposure, automatic focusing and automatic diaphragm. 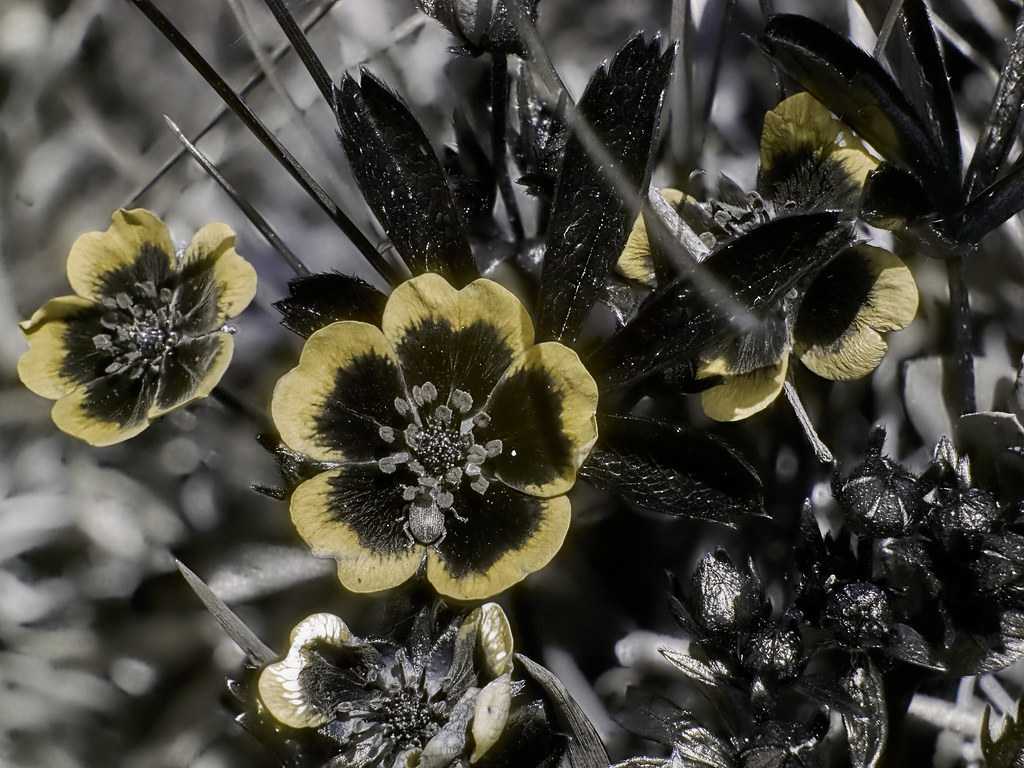 Difference in sensitivity between off-the-shelf and converted E-M1

I used a white PTFE target illuminated with a LED Engin 385 nm LED (3 W). The StraightEdgeU filter, and the Sigma 19 mm f:2.8 DN Art, captured raw (ORF) images and looked at the raw data for the target in RawDigger. In the image from the off-the-shelf camera sensor counts were for R 63%, G 70% and B 71% of those in the full-spectrum-converted camera.

Although monochromatic images can be captured in UV-A with off-the-shelf Olympus cameras (E-M1, E-M10 and most likely other MFT mirrorless cameras from Olympus) the images are in response to a narrow range of wavelengths between about 380 and 400 nm. On the other hand the Sigma 30 mm f:2.8 DN A 013 works well with both the converted and off-the-shelf E-M1 cameras.